Oatly and Blackstone: What can purpose-led brands learn from this unicorn investment? 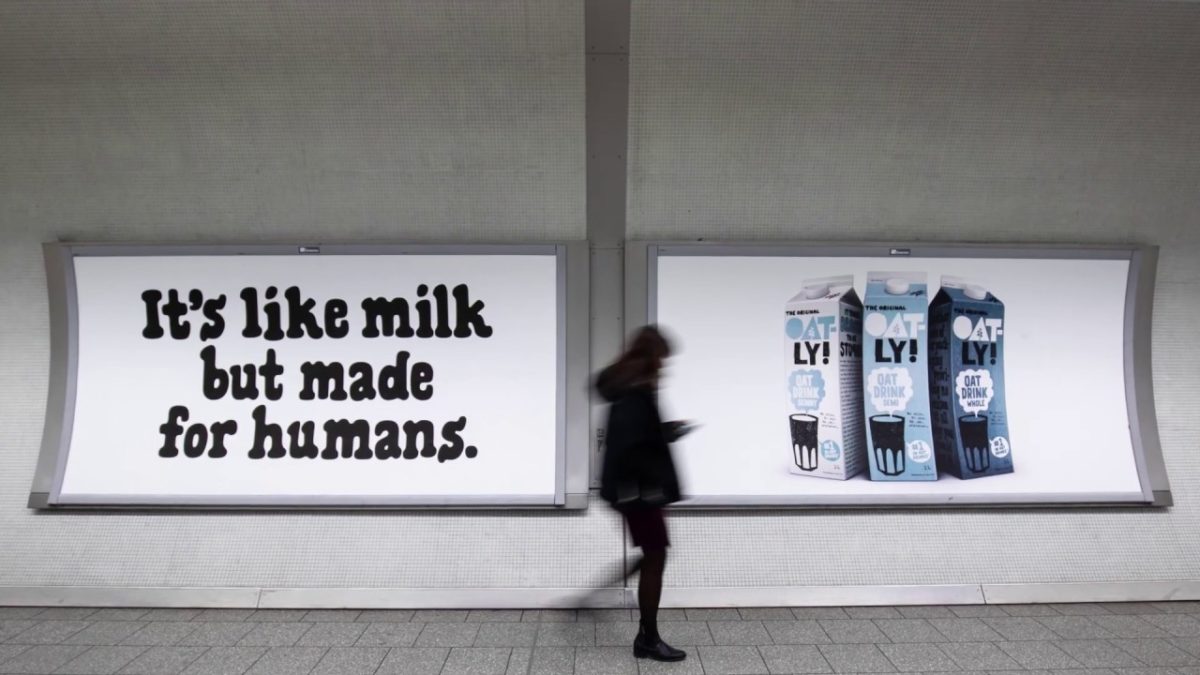 Oatly, the popular oat milk, raised $200m in July. However, lifelong fans are now boycotting Oatly, after hearing it had received funds from a “Trump-supporting, anti-sustainability private equity firm.”

If you want to scale a brand fast, you need capital. But should you take funding from shareholders that don’t match your brand values? And how can a brand maintain its purpose with integrity when acquired or taking on external funding?

TLDR: We don’t think the way Oatly has been criticised for taking investment from Blackstone is completely fair. However, we think they’ve missed an opportunity to be transparent on their plans to ensure the preservation of their integrity as they grow.

There comes a time when many a ‘born good’ company decides to take money to scale. Although the impact investment arena is growing, brands seeking growth capital can be left taking money from less values-aligned funds - from large banks to corporates. Oatly took investment from a high profile bunch, including Natalie Portman, Oprah Winfrey, Jay-Z and former Starbucks CEO Howard Schultz. However, they also decided to take funds from Blackstone (who now own 10% of Oatly, the largest single investor in the round). This ignited a boycott from conscious shoppers.

What’s the deal with Blackstone? Blackstone Group partially owns a Brazilian firm that is helping transform the Amazon from jungle into high-intensity agriculture. Plus, the CEO is a top donor to Donald Trump. Doesn’t seem an ideal destination for the profits generated by the Milk for Humans brand. Staying true to your purpose and values through growth is a key challenge for any purpose-driven brand to tackle.

A few of us were back in the office this week, and this topic sparked debate in the team...

“When it comes out that a brand like Oatly has taken money from a firm like Blackstone, my knee jerk reaction is disappointed but not surprised. There are so few private equity firms that *aren’t* invested in something that has some kind of negative impact on the planet that I’m genuinely interested to hear from anyone who can show me where else Oatly should have taken capital investment from? They have huge ambition to shake up the dairy industry and take market share from dairy giants. In order to continue to serve the growing population of Oatly devo(a)tees , they need the kind of money that only a firm like Blackstone could invest in them. I wonder if the same ‘woke’ consumers that are boycotting Oatly are also boycotting their love lives? Blackstone is invested in MagicLabs, who own the dating app Bumble…” - was the reaction of Beth Thayne, Product Manager at Provenance.

On the other hand, “might this be yet another good signal for Blackstone and the future of investment funds?” commented Louise Garvin, our Head of Enterprise. This is a significant investment for Blackstone in the impact space - a sign of even the most aggressive funds shifting tact. After the multitude of “impact funds” that invested in BooHoo, oat milk seems fairly safe territory for aggregate impact results. According to the BBC’s “Which Milk Should I Choose”, Oat has the lowest impact across a range of different factors. This theme was the Oatly CEO’s argument. They commented that the investment would “steer global capital towards sustainability”. They told The Guardian “If we just shut out the companies that may make less sustainable choices, we won’t give them the chance to improve and make more sustainable choices, so global capital will keep being steered in a less sustainable direction.”

This is not a new problem. Including for Oatly - state-owned investment firm, China Resources, bought a 30% stake in the company in 2016. But, is a boycott right? Should we enable extreme global growth of more sustainable solutions even if that means accepting somewhat dirty funds to enable it? There is no doubt that the global capitalist system which pursues growth at all costs is causing human exploitation and environmental destruction. But is there a “right kind” of large-scale growth?

Provenance started with a focus only on small businesses - the born good, who are often creating more sustainable products. However, to create the change we want to see - we need impact action at scale. Where does that exist? Big brands and corporate groups. Whether they should exist or not, they do today and we must rise to transform them and scale more sustainable solutions to challenge them. Oatly want to fight in this arena, for change at scale - that meant a large investment was needed.

The thing that stood out most to us at Provenance was how Oatly hadn’t been on the front foot by being transparent on the topic. For a brand that writes how they failed on the front of their impact report - this to us seemed odd. Particularly as other supposedly transparent brands, like Everlane, are being accused of over-promising and under-delivering.

So how could Oatly have responded? And more importantly, what can purpose-driven brands do to protect their impact as they scale?

In 2000, Ben & Jerry walked out the door when they sold to Unilever. But they added conditions into the sale to protect the mission of the Ben & Jerry’s ice-cream brand. Through this, the brand claims to have held onto their purpose despite the sale. In today’s far more transparent, digital age, here’s what we would have expected to see from Oatly from the start:

1. An easy to understand and accessible (e.g. on Instagram) announcement in July on the investment acknowledging the reputation of any investors, along with a candid explanation of why they’ve taken funds from Blackstone and what they’re going to spend it on.

2. A transparent roadmap for how they intend to maintain control and ensure the integrity of their governance, sourcing, procurement, brand and values as they scale with the money they’ve taken.

3. A way for shoppers to understand the choice that's been made and the trade-offs that have been accepted, or even mitigated, in the hope of longer-term, bigger picture impact.

But should you boycott? I think there are two key actions for a conscious citizen here: Demand transparency from Oatly on their supply chain and impact, asking for credible evidence and assurance on their commitments and progress. Secondly, prioritise moving your money. No sense in boycotting Oatly if you’re a ‘filthy’ investor yourself – is your bank funding deforestation? Something to ponder over your oat milk latte.

This article was originally posted on LinkedIn by Jessi on the 4th of September, 2020. To learn more about how we work with brands, see our latest case studies.

Jessi Baker, MBE, is the founder and CEO of provenance.org, the global leader in sustainability marketing technology. She is an Art and Science hybrid, with a Master’s in Engineering from Cambridge University and Design from the Royal College of Art. Across the US and Europe, she has worked with many brands on technology and digital design strategy including Cult Beauty, Unilever, GANNI and Princes.

The Sustainability Reset: Communicating brand purpose in a new world

What’s the score? Transparency and the rise of eco rating

A brave new marketer: rising to the challenge of sustainability communications

Time your campaigns right with our 2023 sustainability calendar

To boost reach and engagement amongst conscious shoppers, download our calendar and tie your marketing activities to key calendar moments.

Thanks – please check your inbox for your download link
Oops! Something went wrong while submitting the form. 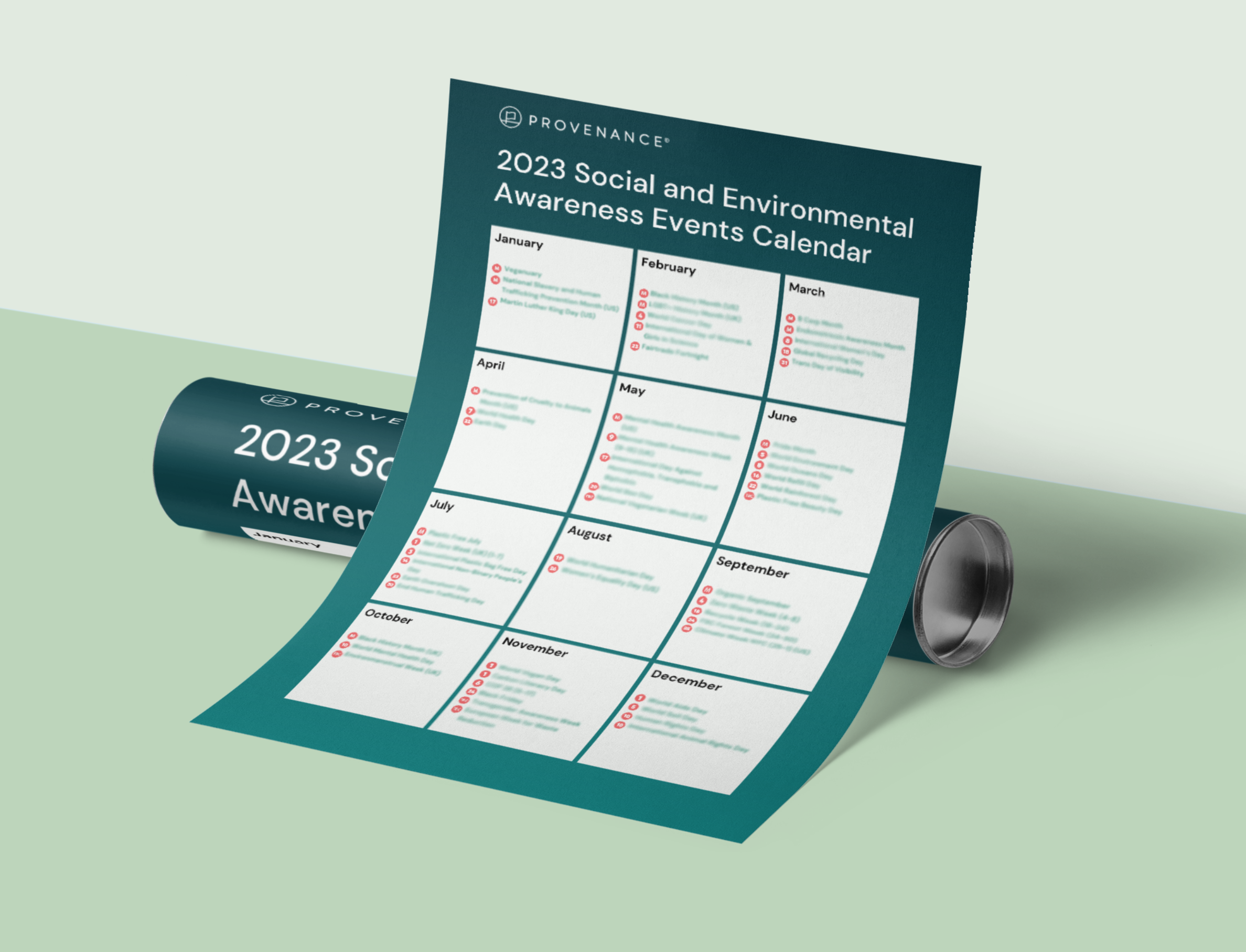